ANOTHER WIN FOR ED BUTLER 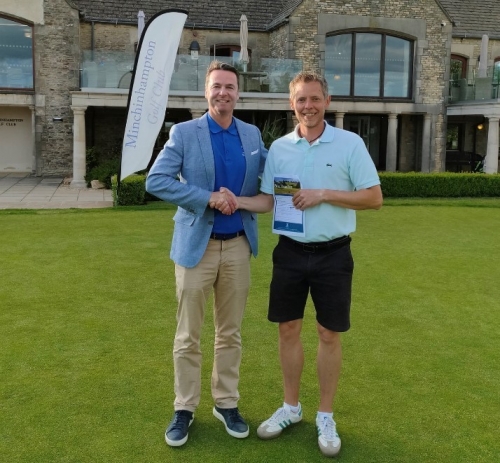 Lansdown’s Ed Butler notched up another win this week with a fantastic performance at the Minchinhampton Scratch Open.  Ed’s gross score over 36 holes of 134 – two 67’s – was quite a feat and enough to win by three shots over his nearest rival. He also did well in the Gloucestershire County Championships at Lilley Brook Golf Club, placed fourth with a gross score – over four rounds – of 284.

Back at the club, the competition season is in full swing.  Eric Morgan won the Challenge Bowl with a nett score of 67.  Divisional winners were Lewis Pristo in Division 1 with a nett 70 on countback from Richard Jackson, with Steve Maddison in third place with nett 73.   First in Division 2 was Steve Hillman (nett 68) with Joe Godwin second (nett 69) and David Price third (nett 70 on countback).   With Eric’s score taking first place in Division 3, Kennith Wyatt was placed second with a nett 67, followed by Tim Rickards with a nett 68.

Kenneth Mitchell won the Richardson Cup coming in with a nett score of 69.  Kenneth was first in Division 1, with James Flew in second place with a nett 70 and Lewis Pristo was third with nett 71.   Top of Division 2 was Mike Passmore Snr (nett 70), with Steve Hillman in second place with nett 71 and Pete Gillard coming in third with nett 73.  Division 3 was won by Trevor White (nett 69), followed by Mark Bees (nett 70) and Lee McLeod (nett 72).

The Burnside Trophy is a four ball better ball medal competition and Craig Savage and Graham Belsten were clear winners with nett 62.  Runners up were Phillip Hill and Bill Rose with nett 65, and Robert Braund and Steve Maddison were third with nett 68 on countback.

Lansdown ladies had two good wins in their last two home matches in Division 2 of the Bristol & District Alliance.  Playing off scratch, they beat Worlebury 13 points to 1  and The Bristol 10 points to 4.

Lansdown’s Amelia Matthews had a great week at the Somerset Ladies County Championship, held at Clevedon Golf Club last weekend.  22-year-old Amelia came third overall, two shots behind the leader, with a gross score of 150 over 36 holes, which resulted in a reduction in her handicap from 2.1 to 1.  She won the trophy for the Under 25’s best gross and the overall best nett prize.

Back at the club, Lansdown’s competitive season got off to a good start in April, with some worthy trophy winners and some very good scores.

Two competitions which had been running through the winter reached their final stages, with the final of the Westmoreland Cup and the closing of the Ladies Winter Eclectic.  The Westmoreland Cup is a 4 Ball Better Ball Knock Out competition and the trophy was won by Graham Belsten and John Mountain who beat Liam Fussell and Martin Longford by three holes to two.

The Ladies Winter Eclectic also reached its conclusion this week.  The best eclectic score over eight rounds was submitted by Anna Proctor, who won by a clear five shots from runner-up Bev Rees.

Trophy competitions for men during April included the Evans Bowl, a singles Stableford which was won by Scott Finn, handicap 29, on countback with 40 points.  Divisional winners were Tim Godwin in Division 1 with 39 points, Javan Harris in Division 2 and Graham Belsten in Division 3 also with 39 points.

The Broadhurst Cup is a four ball better ball Bogey competition which was won by Tom Furnell & Mike Banner with an impressive score of +8.  The second pair with +4 on countback were Ken Mitchell and Eric Morgan.  Also with a score of +4 were William Crowley and Ken Rawcliffe in third place.

The ladies played their Seventy Bowl competition which was won by Bev Rees with 37 points, on countback from Amelia Matthews in second place.  Suzanne Wheeler came in third with 36 points.

The men’s Stragglers Team, who play friendly four-ball-better-ball matches, came away from their first match of the season at The Bristol Golf Club with a creditable draw, with four of the five matches going down to the 18th hole

The competition season at Lansdown began in earnest with the first trophy competition, the Seddon Bowl, won by Jack Willett.  The Seddon Bowl is a singles Stableford competition for newcomers - members who joined the club during the previous year.  Due to the pandemic restrictions, the Trophy was not contested last year, so this year’s competition included those who joined the club in 2020 as well as 2021.  Jack won with a score of 39 points, on count back from the runner-up, David Moore.  Jeff Fishlock was third with 37 points.

Following the election of Margaret Ruxton as our new Club Captain, the traditional Captain’s Drive-In and Installation Bowmaker took place on Saturday.  The event was blessed with bright sunshine, although there was a chill in the air, and there was a good turnout of members to watch Margaret take her drive.  It wasn’t one of her best but it will have raised some money for her charity - Children’s  Hospice South West - as members made donations to guess how far she would hit and whether the ball was on the fairway.

Lansdown’s men’s Scratch Foursomes played their first match of the year against Clevedon which they won comfortably 4 matches to 1.  Lansdown were promoted to Division 3 of the Bristol & District Golf League at the end of last season, so a win in the higher Division was a good start.  The team have been grateful to Peter Doust and his company Knightsbridge Personal and Corporate Solutions for their sponsorship over the past few years.

There was a good entry for the Midweek Stableford played on 7th April which was won by David Price with 40 points.  Division 1 was won by Alan Bickley with 30 points on count back from Andy Lee (2nd) and Patrick Foster (3rd).  Division 2 winner was Chris Sparkes with 37 points, followed by David Moore with 35 points on count back from David Newport in third place.  Malcolm Payne won Division 3 with 34 points, with David Pearce runner-up with 31 points and Darran Burt was third with 29 points.

If you are a member, please log in to the Members Area for more news and updates.

The UK Government has today provided clarification on outdoor recreation and rules on social distancing in England resulting in our Golf Course being open from Wednesday of this week.

Below you will see our Temporary COVID-19 Policy that will be strictly enforced.

THIS DOCUMENT HAS BEEN COMPILED TO ENSURE A SAFE RETURN TO GOLF FOR ALL OUR MEMBERS.  PLEASE READ THE FOLLOWING CAREFULLY AND IF THE GUIDELINES ARE FOLLOWED WE CAN ONCE AGAIN START GOLFING FROM WEDNESDAY 13th MAY AND MORE IMPORTANTLY IN A SAFE AND RESPONSIBLE MANNER. WE VERY MUCH LOOK FORWARD TO WELCOMING ALL MEMBERS BACK TO LANSDOWN GOLF CLUB.

MEMBERS WHO HAVE NOT PAID THEIR SUBSCRIPTION WILL NOT BE ELIGIBLE TO BOOK A TEE TIME OR PLAY THE COURSE.

IMPORTANT INFORMATION (this will be reviewed daily, and members will be notified of any changes):

·         Please be aware of the Club’s safety policy, especially the recent updates regarding Covid-19.

·         A handful of start times will be reserved for members without access to a computer and therefore cannot book online.  These will be available on a first come first serve basis by phoning the professional shop.

SOCIAL DISTANCING RULES TO BE APPLIED AT ALL TIMES

Prior to arrival at the course

·         Members who have not paid their subscription will not be eligible to book a tee time or play the course.

·         Members to wash their hands before leaving home and are requested to arrive dressed ready to play.

·         Access to toilets and locker rooms will be available by entering through the Pro Shop and ensuring social distancing remains in place.  Locker room should only be accessed to collect equipment. (Members are requested to take equipment home after first visit).

·         Entry to toilet and locker room facilities should be kept to a minimum and only accessed when absolutely necessary.

·         Club buggies will not generally be available for hire, however, any member dependent on a buggy, please ring the Club.

·         Putting green may be used 10 minutes prior to tee-time.  Please observe social distancing measures in place.

·         SOCIAL DISTANCING RULES TO BE APPLIED AT ALL TIMES

·         Please ensure your relevant membership fees or green fee have been paid.